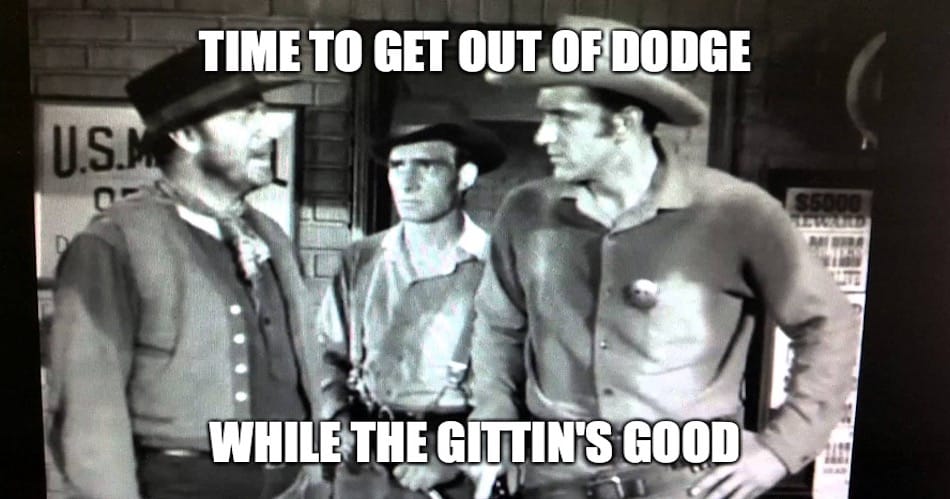 Get Outta Dodge with DSTs

Get (the hell) out of Dodge is a reference to Dodge City, Kansas, which was a favorite location for westerns in the early to mid-20th century.  It was immortalized in pop culture by the iconic TV show “Gunsmoke.”  More specifically it means to leave or depart from a place with marked urgency.

Income producing commercial property owners should take this to heart.  Most big cities, particularly on the coasts are dominated by the Democratic Party.  This in turn is now owned by activists who wish to rebuild the American urban landscape in a utopian manner that possesses nearly perfect qualities/conditions for all its citizens.

The holy trinity of these “New Left Urbanists” are:  Bicycles, public housing and mass transit.  They take a scorched earth policy to the suburbs, single family housing and cars, all of which reek of white supremacy and social injustice.  It is their goal to bring about a great leveling.  In so doing, they seek to dictate “how people live and set right society’s social economic and moral deficiencies.”

This government owned and operated housing extravaganza will also tick off all the obligatory identity politics boxes by determining who lives where.  So not only will government build housing in the future but it will also determine who lives in it.

If you as a landlord think this vision of a new American urban landscape far-fetched or simple posturing on the part of wet behind the ears, leftist ideologues, think again. These people have already seized the levers of power in many cities up and down the coasts.  They not only populate but dominate urban planning and housing development departments as well as corresponding policy advocacy.

Why do you think things continue to fail in places like Seattle, Portland, San Francisco, Sacramento and Los Angeles?  New left urbanists have captured city hall, set the agenda, implement policy and brook no opposition from the private sector.  Anyone bold enough to raise his/her head and object is immediately branded a racist, anti-poor or a filthy one percenter.  As such, you are cast out of acceptable society and subject to economic despoliation.

These New Left Urbanists have seized real power in city hall and have harnessed the bureaucracy to their millennial ends.  They’ve learned how to use the zoning and permitting process to stanch private development and stack the deck in tenants favor.  They also aggressively promote new taxes to pay for their agenda.  This of course, will fall disproportionately on existing landlords and private property owners.  Nothing like paying for the rope that hangs you. I think Lenin said something like that.

However, with DSTs, there is hope.  These folks are confined largely to the west coast and northeastern seaboard, with a smattering in the upper mid-west.  Their presence and power roughly correspond to a red state – blue state map.

This is fortuitous for income property owners.  In his April 24, 2018 WSJ article, world renowned economist Arthur Laffer categorically states that, “In the years to come, millions of people, thousands of business, and tens of billions of dollars of net income will flee high-tax blue states for low-tax red states.”

To make money in real estate, you must be on the receiving end of significant demographic change.  For your rents to go up and your dirt to appreciate, there must be more folks moving in than out.  The demographic trend is your friend.

This migration of people, business and money out of high-tax blue state into low-tax red states has been going on for years.  The principal catalyst has been an aging population, an increasing regulatory burden and weather.  However, this trickle has now turned into a flood thanks to the Trump tax bull’s cap on state and local taxes.

People do what they are economically incentivized to do.  The government has just incentivized millions of high wage earners, business owners and those aspiring to become rich to “Get the hell out of Dodge.”

DSTs are your principal enabler to do just this.  They give you access to the highest quality institutional properties in the best possible locations.  Site selection and property management in an area far from home is no longer your concern/burden.  This is all done remotely for you by some of the largest, oldest and most successful real estate companies in the nation.  To paraphrase Timothy Leary from the sixties, you can, “cash out, tune out and turn on” to a non-management intensive lifestyle more in-sync with your relaxed living style.

This way you don’t have to do battle with the “New Left Urbanists.”  Leave them to their own devices and the coastal cities they are intent on hollowing out while you benefit from the steady in-migration of people, business and money into those states and communities which still respect private property rights.  Get out of Dodge with DSTs while the gittin’s good.