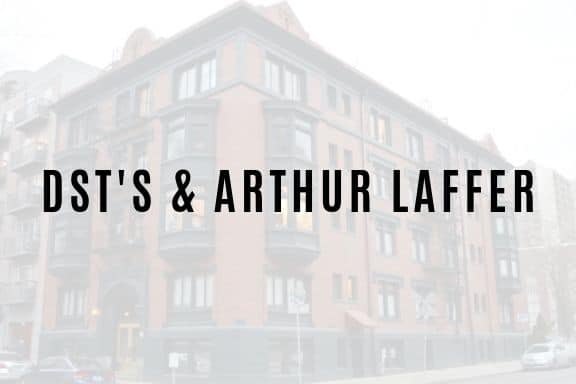 What, you ask does Arthur Laffer have to do with Delaware statutory trusts?  Plenty, if you want to make money.  This is because in a world where most people are wrong most of the time (professional, academic and government economists) he has the disconcerting habit of being right.

In a world dominated by liberal economists who think it’s governments job to stimulate/provide economic growth, Laffer prefers to leave this to the private sector.  To this end he has unflinchingly promoted tax cuts and business deregulation.

His lonely journey began during the economic malaise of the 1970s.  In an era characterized by high taxes, inflation, big government and a moribund economy, he was the prophet crying out in the wilderness ‘less is more.’

He would become the leading champion of reducing income tax rates and a key player in the Reagan cuts of 1981 that touched off an economic boom lasting two decades.

After 8 years of a flat-line economy under the anti-business Obama administration, he struck again in 2017 helping to shape Trump’s tax cuts.  This effectively doubled economic growth from 1.5% to 3%.

As an aside, when everyone else was preparing to celebrate the inevitable coronation of Hilary Clinton, Laffer was predicting Trump would win the presidency.  This wasn’t a mere hunch on his part but based on numerous historical parallels.

He peered into his crystal ball again in April of 2018 following passage of the Trump tax cut with an article entitled So Long, California, Sayonara, New York.  In it, he predicts the SALT (State And Local Tax) provision in the bill, capping the deduction for state and local taxes at $10k, will turn the steady trickle of people and money leaving high tax blue states for low/no tax red states into a flood.

Over a year later, this is exactly what’s happening.  People, money and business are fleeing high tax states like New York, New Jersey and Connecticut for tax havens such as Florida.  This is attested to in numerous subsequent Wall Street Journal articles (High-Tax State Exodus 12/28/2018, Out-of-State Buyers Flock to Miami 2/4/2019, etc.).

A recent article in the WSJ Mansion section goes into detail regarding its impact on the Greenwich Connecticut housing market.  For years one of the wealthiest zip code in the nation, houses are now selling for half the original asking price or going to the auction block.  This is because their owners, the exclusive NYC hedge fund crowd, have decamped to Southern Florida.

The inherent illiquidity of commercial real estate makes any purchase a long-term investment.  This is exacerbated by the fractional ownership nature of DST properties.  Therefore, it is only prudent to take direction from someone like Laffer with a 50-year track record of getting things right.  Follow his advice, follow the money and it takes you straight to the Sunbelt.